When you are a writer, you rotate between writing, editing, and revising.  But you are also, at all times, thinking about what your next story will be.

Many times, we choose the story we are writing.  We may get a spark of an idea, and work to develop it into a full story.

But sometimes, in a rare moment, a story finds us.

Almost four years ago, on a visit to New York City, my sister and I had the honor of visiting the 9-11 Memorial.  During our visit to the museum gift shop, I discovered a book about the Callery pear tree that survived 9-11. Entitled The Survivor Tree—Inspired by a True Story, it is by Cheryl Somers Aubin and illustrated by Sheila Harrington.  Until that moment, I had not realized New York had such a tree or such a book.

New York's tree has a much different story than ours. It was recovered from the rubble and placed in the care of the New York City Department of Parks and Recreation, nursed back to health, and transplanted back on the Memorial grounds in 2010. But as with ours, it grew to be a cherished symbol for New Yorkers.

I decided to buy that book, and then find the book about our own Survivor Tree upon my return home.  Back in Oklahoma, I began to look for one, only to discover there wasn't one.

There needed to be.

The idea sat on my heart for a couple of years.  You could say, the seed of the story planted itself there, and wouldn't go away.  And  I knew that a story had found me.  A story that needed to be told.

You see, I lived here, in the Oklahoma City metro area, on that horrible day.  I was teaching that bright blue morning when we heard the news and gathered around the televisions.  Wondering, horrified, how this could happen here.

That was the day the Oklahoma Standard was born.  And we watched in the following hours, days, weeks, months, and years, as our fellow Oklahomans proved to the world that no matter what hate may wrought, good will overcome.

I first wrote the story from a third-person narrative.  It was okay—basically a narrative account of the bombing written on a child's level.  But it failed to strike a chord in my heart. This was painful treacherous territory. How could it be told in a way that would uphold our promise to never forget for children?

That is when I knew the tree needed to tell the story.  And so, that is what I did.  I wrote my story from the tree's point of view.  And cried.

The publishing industry is highly competitive, and many great books are not published because they don't find their way to the right literary agent or the right editor or the right publishing house. I began to submit my manuscript to agents in New York City.  But they did not seem to understand how significant this tree was—and remains—to Oklahomans, both old and young.

for this was by no means only an Oklahoma story . . . it was an historic American story.

In the end, I found a publishing house right here in Oklahoma:  the award-winning RoadRunner Press.  Its editor, Jeanne Devlin was editor-in-chief of Oklahoma Today magazine when the bombing occurred in 1995, and led the team that published the Oklahoma Today memorial issue of the tragedy, 9:02 a.m., which was later released as a book by the University of Oklahoma Press in Norman.

And so that is how the book came to be.

The Survivor Tree book debuted Saturday, Nov. 4, 2017, at the most appropriate of places:  under the boughs of The Survivor Tree.  I don't believe I can adequately express what it felt like to hear afterwards that someone had seen a mother reading the book to her daughter while sitting by the reflecting pool.  I can only hope it is a scene that becomes part of the experience at the Oklahoma City National Memorial and Museum.

You see my hope is that this picture book will help to uphold our promise to never forget April 19, 1995, and the 168 people we lost that day more than twenty years ago.

It falls to us to share this piece of Oklahoma and American history with a new generation. May they learn what can happen when hate is allowed to fester in one's heart—and the ultimate lesson of Oklahoma . . .

That love will always overcome evil.

will go to the

The Survivor Tree picture book is available at the gift shop of the Oklahoma City National Memorial and Museum, 620 N. Harvey Avenue, in Oklahoma City. (Store entry does not require admission, but if you've not toured the museum it is a must-see.)

A portion of each book sale will go to the Oklahoma City National Memorial and Museum. 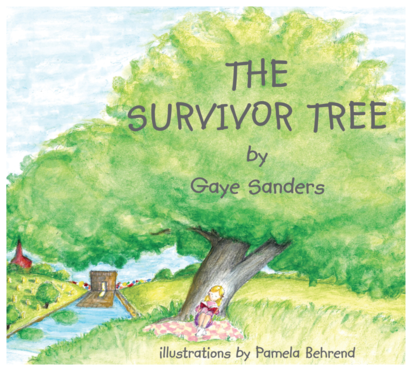 The Survivor Tree is also available at your local indie bookstore, as well as from Barnes and Noble Booksellers and Amazon and other brick-and-mortar and online retailers.

The Survivor Tree has been awarded the 2018 Comstock Read Aloud Book Award for Children's Literature.  It is the 14th year the award, which promotes reading aloud to children, has been given. The book was selected from some 600 submissions; with more than 20,000 children reading the nominees. The award is sponsored by the Curriculum Materials Center at Minnesota State University, Moorhead.

The Survivor Tree has been named to the 2018 Reading the West Book Award Shortlist. The award is sponsored by the Mountains & Plains Independent Booksellers Association.

On April 7th, 2018, The Survivor Tree received the Director's Award at the 29th Annual Oklahoma Book Awards at the historic Skirvin Hotel in downtown Oklahoma City.  The Director's Award, which recognizes works of special merit, has only been bestowed four times before in the OBA's twenty-nine-year history.